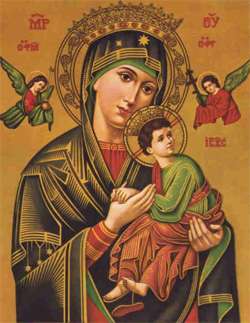 Maria Dolynskyj was the daughter of the late Elias and Barbara (Dolohan) Salij.  Born in Ternopil, Ukraine on January 14, 1925, she was one of six children.  In 1941, when Maria was 16 years old, she was taken by the Nazis from her home in Ukraine and brought to Germany where she was forced into slave labor.  While living in the displaced persons camps of Germany, she met her beloved husband Hryhorij Dolynskyj.  They were married on February 24, 1946, and soon after on December 5, 1946 she gave birth to their one and only child, Anna Maria Dolynskyj.
When WWll finally came to an end, her little family of three decided to flee to the United States.  On Memorial Day Weekend of 1950, aboard the U. S.S. Captain Black, they arrived in New York City through Ellis Island as refugees.  Within a few days, they moved to Philadelphia, PA, where a family offered to sponsor them.
While in her youth, Maria learned how to sew at Foster Clothing Co. and later became a Master Seamstress for Superior Clothing Co.  Her hands were that of an artist, creating custom suits and clothing for both men and women of all ages.  Maria also loved cooking, baking and of course entertaining.  During her retirement, she, along with her husband and family, enjoyed volunteering at Tryzub Ukrainian Sports Club.  She helped cook and serve food at both Tryzub and the Ukrainian Educational and Cultural Center of Philadelphia until she was 86 Years old.  She spent the last few years of her life traveling and spending time with her family.  Maria died at age 97, on May 1, 2022 in her home, surrounded by family.  Her strong faith and stubborn will is what helped her overcome all the hardships she ever faced.  She will always be missed dearly by many and is survived by her daughter Anna Maria Dolynskyj; Granddaughter Zina Maria Kwiatkowsky (and Husband Andrew Zajac); and Great-Granddaughter Victoria Lynne Graudins-Seidel (and Eddie Seidel).  Her spirit, together with our memories, will always be with us; as we find comfort in knowing she is at peace.

Relatives and friends are invited to her viewing on Friday at 9 AM at the Cathedral of the Immaculate Conception.  Requiem Services will be sung at 10 AM.  Burial will follow at Lawnview Cemetery.

In lieu of flowers, donations in Maria's memory may be made to United Ukrainian American Relief Committee.

To send flowers to the family or plant a tree in memory of Maria Dolynskyj, please visit our floral store.